From Port'Aquila, threshold of the walled city, to the last quarries of Pila's stone, passing by Laste, Coste Park, Moià and Villamontagna. A trail unfolding through all areas where stones where extracted and used for the construction of the city 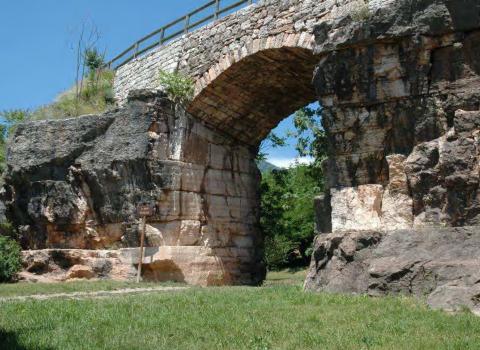 The itinerary connects the historic part inside the walls of Trento with the upper settlements of the eastern hill, while touching different places that are historically relevant for the formation of the city. As a matter of fact, on the path you can see Buonconsiglio's stone quarry (located on the back of the castle in via della Cervara), Coste's quarry (where the construction material has been extracted since the 50s) and Pila's quarries that is still being cultivated.

All of these is part of the "colonisation" history of the East hill: from the first isolated religious complexes (Capuchin and Discalced Carmelites Monastries), to the 19th - 20th century bourgeois villas, to the massive urbanisation starting from the economic boom of the 50s and 60s until now.

After leaving Port'Aquila go up to Saluga's garden, that takes its name from the river that flows in the valley after having collected Cognola's waters. The path follows the Via Crucis built by the Carmelites in the 1959, that goes on until the Shrine of the Laste with a series of niches on the walls skirting the street.

The Shrine of the Laste, which origin dates back to the beginning of the 17th century, is an interesting place. The path continues toward Coste Park that occupies the stone quarries of the "Laste delle Coste". Lava craters have been recently transformed into an urban park full of floristic and geological elements, while still keeping some remains of the old extraction activity.

The hilly itinerary, often embedded between dry stone walls and hedges, offers interesting views on the surrounding landscape that well represents the transition form the urban environment to the peri-urban agricultural areas where examples of patrician and religious architecture like the view of Toresela Seiser, the nucleus of Moià and Chiogna can be seen. To finish off the hill's landscape tour, admire the woodland at the foot of the rocky cliffs of Calmuz. It is a mixed forest with common hornbeams, ashes, manna ashes, Scots pines and other typical hill species.

After Villamontagna go to Pila's quarries, other quarry environment, partially still active and partially transformed into a park in memory of the old extraction activity.

For further information and details go to OUTDOORACTIVE

The information on this page is subject to change, so this means that none of the indications are absolute. It is impossible to completely avoid inaccuracies, taking into consideration the rapid environmental and weather changes that may occur. Therefore, we decline any responsibility for any damage caused to the visitor. However, it is strongly suggested to check the path state, the environmental and weather conditions before going on an excursion.

The Network of Bondone Nature Reserves is not responsible for the management and maintenance of the trails. Therefore, we decline any responsibility for damages that can occur to people, animals or objects.