Structural improvement actions of the stand 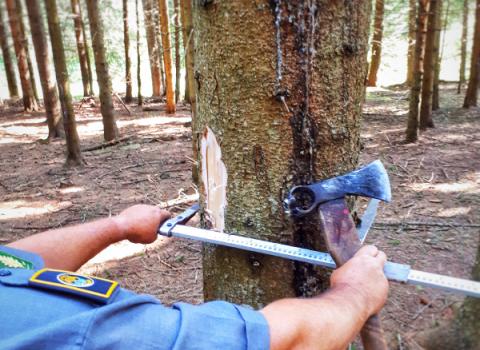 Below you can find some information that will help you understand the reasons for this apparently invasive action in a protected area.

What is a Nature Reserve?
A Provincial Nature Reserve is a protected area set up by an act from the Autonomous Province of Trento, it is defined by precise borders and it is provided with conservation measures for biodiversity preservation.

What is a peat bog?
A peat bog is a natural ecosystem that is particularly rich and important due to the great quantity of water contained in the ground. It is an environment of exceptional naturalistic interest that during the years has become rarer and therefore must be protected. In the past the peat bog was a lake that during the centuries has been slowly filled in becoming a precious habitat, especially from a botanical point of view.

Why do we cut trees?
The actions under the measures of Provincial Nature Reserve - Natura 2000 site - Viote peat bog have the aim to diversify the flat structure of the spruce forest improving the ecological stability and creating a favourable habitat for a richer flora and a more diversified fauna.

How to choose which trees need to be cut
The trees that are going to be cut down have been chosen on the basis of forestry evaluations, as required by the management plan of the forest and also by the ecological-naturalistic plan. For that reason dry and decaying trees that can't be turned into timber have been left there because they are extremely important for some faunal species (mainly birds and insects). The intervention consists in the opening of some "holes" of 400-600 m2 in order to allow the entrance of sunlight and trigger processes of soil improvement and help the natural renewal of the forest.